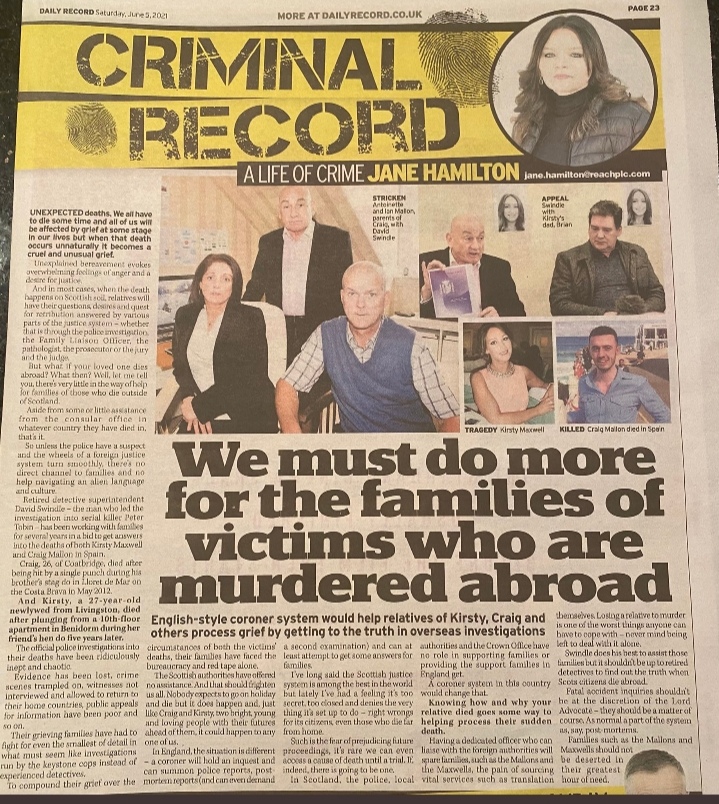 Unexpected deaths. We all have to die some time and all of us will be affected by grief at some stage in our lives but when that death occurs unnaturally it becomes a cruel and unusual grief.

Unexplained bereavement evokes overwhelming feelings of anger and a desire for justice.

And in most cases, when the death happens on Scottish soil, relatives will have their questions, desires and quest for retribution answered by various parts of the justice system – whether that is through the police investigation, the Family Liaison Officer, the pathologist, the prosecutor or the jury and the judge.

But what if your loved one dies abroad? What then? Well, let me tell you, there’s very little in the way of help for families of those who die outside of Scotland.

Aside from some or little assistance from the consular office in whatever country they have died in, that’s it.

So unless the police have a suspect and the wheels of a foreign justice system turn smoothly, there’s no direct channel to families and no help navigating an alien language and culture.

Retired detective superintendent David Swindle – the man who led the investigation into serial killer Peter Tobin – has been working with families for several years in a bid to get answers into the deaths of both Kirsty Maxwell and Craig Mallon in Spain.

Craig, 26, of Coatbridge, died after being hit by a single punch during his brother’s stag do in Lloret de Mar on the Costa Brava in May 2012.

And Kirsty, a 27-year-old newlywed from Livingston, died after plunging from a 10th-floor apartment in Benidorm during her friend’s hen do five years later.

The official police investigations into their deaths have been ridiculously inept and chaotic.

Evidence has been lost, crime scenes trampled on, witnesses not interviewed and allowed to return to their home countries, public appeals for information have been poor and so on.

Their grieving families have had to fight for even the smallest of detail in what must seem like investigations run by the keystone cops instead of experienced detectives.

To compound their grief over the circumstances of both the victims’ deaths, their families have faced the bureaucracy and red tape alone.

The Scottish authorities have offered no assistance. And that should frighten us all. Nobody expects to go on holiday and die but it does happen and, just like Craig and Kirsty, two bright, young and loving people with their futures ahead of them, it could happen to any one of us.

In England, the situation is different – a coroner will hold an inquest and can summon police reports, post- mortem reports (and can even demand a second examination) and can at least attempt to get some answers for families.

I’ve long said the Scottish justice system is among the best in the world but lately I’ve had a feeling it’s too secret, too closed and denies the very thing it’s set up to do – right wrongs for its citizens, even those who die far from home.

Such is the fear of prejudicing future proceedings, it’s rare we can even access a cause of death until a trial. If, indeed, there is going to be one.

In Scotland, the police, local authorities and the Crown Office have no role in supporting families or providing the support families in England get. A coroner system in this country would change that. Knowing how and why your relative died goes some way to helping process their sudden death.

Having a dedicated officer who can liaise with the foreign authorities will spare families, such as the Mallons and the Maxwells, the pain of sourcing vital services such as translation themselves. Losing a relative to murder is one of the worst things anyone can have to cope with – never mind being left to deal with it alone.

Swindle does his best to assist those families but it shouldn’t be up to retired detectives to find out the truth when Scots citizens die abroad.

Fatal accident inquiries shouldn’t be at the discretion of the Lord Advocate – they should be a matter of course. As normal a part of the system as, say, post-mortems.

Families such as the Mallons and Maxwells should not be deserted in their greatest hour of need.